On Friday after work, instead of going home as I always do, I took a turn. I drove into the hustle and bustle of New Wave Friday at Ward Village. Why? They were holding an event celebrating the end of this year’s Pow! Wow! Hawaii, and I wanted to check out the special events going on. As you will find out below, there were quite a few.

When I got there at around 5PM, I made a beeline straight for the Eventbrite tent. There were already people waiting! I, along with all those people in line, RSVP-ed for the free tote designed by Pow! Wow! founder, Jasper Wong. He was actually there, too, in a booth of his own down the road, painting the featured Lexus model of the evening. He was so quick! Every time I passed him, he had made his way far around the car.

One of my favorite deals of the evening was from Via Gelato. Sure, they weren’t a pop-up booth at the event, but they were one of the lucky businesses who made use of their space, and the buzz that surrounded them this evening. The $1 Keiki Cup deal was brilliant, and left a line of people out the door! My mom and I were lucky to beat the crowd and scored two cups of our own — Chocolate Haupia + Salted Caramel with Brownie Batter, & Coffee + Fudge Swirl. I saw this $1 promotion on their Instagram, so Hawaii peeps, hit that up!

After meandering the streets a bit, we decided that most of the food lines were just too long. Don’t get me wrong, they looked amazing! Istanbul Hawaii definitely caught my eye because I don’t often see Turkish & Mediterranean Cuisine around (though I wish I did!). We hopped in the short line for MoDo and Watanabe Bakery’s joint booth. They had a deal — for $5 you could get both a MoDo doughnut and curry pan. Score! They were so good and fresh, I’m craving another.

I walked around for a good while, observing and basking in the buzz. I had to stop by one of my favorite stores, MORI. It sells a ton of things (clothing, jewelry, stationery, home goods, etc..) made by local brands and artists. Every time I walk in there, something new and exciting catches my eye. I especially loved their new corner setup!

The night was short and sweet, and I didn’t buy much.. But I was so glad to be out. I often spend my Friday nights at home, which isn’t a bad thing, don’t get me wrong! However, it felt refreshing to stray from my normal routine. Sometimes we just need a little spice in our lives! I hope to have a video up to show you all just a bit more from this night, but I hope you’ve enjoyed this short read. 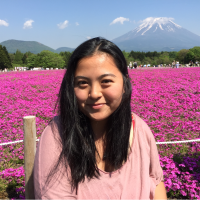